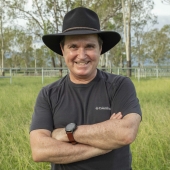 Prior to joining FutureFeed, Rob was a research scientist and project leader with CSIRO Agriculture and Food in Townsville QLD, Australia where he characterized macroalgae and other novel feed additives as natural enteric antimethanogenic and productivity enhancing agents in cattle and sheep nutrition.

He has investigated microalgae and seaweeds at Dalhousie University (Canada) in dairy nutrition, and microbial inoculants and probiotics for mitigation of greenhouse gases in dairy production at Wageningen University (Netherlands).

He has received several Canadian national research awards (NSERC) for his work in Agriculture, and in 2016 his biotechnology work was selected as a representative of CSIRO Agriculture and Food for the innovation acceleration program (ON-2) where the red seaweed feed additive has been launched under the name FutureFeed. In 2017 Rob was appointed to the Food and Agriculture Organisation of the United Nations (FAO) in the Livestock Environmental Performance (LEAP) Partnership as part of the Technical Advisory Group on livestock feed additives.

FutureFeed is commercializing the use of Asparagopsis seaweed as a livestock feed ingredient that reduces methane emissions by 80 per cent. FutureFeed holds the global IP rights to this technology, developed by CSIRO, James Cook University and Meat and Livestock Australia. We deliver supply chain access to our seaweed producers through a variety of licence agreements. We are progressing R+D to confirm the safety and efficacy of Asparagopsis, which in turn is opening regulatory pathways for this technology to be adopted globally.

1) When was the first time you got involved with seaweeds and why?

My seaweed journey began in Canada, where I first became aware of the concept of managing agriculture’s greenhouse gas emissions using seaweeds. An innovative dairy farm family had been using seaweed as a mineral supplement for the cows. Seaweed occurred naturally on the property and was an accessible and economic option. There were consistent improvements in animal performance sustained over time compared to cows that didn’t eat the seaweeds.

Cattle and sheep have long been known to voluntarily consume seaweed in variable amounts if they have access. The farmer desired to commercialise this great concept for the benefit all dairy and beef farmers and regulations required it be scientifically tested before being approved as a commercial feed ingredient. That’s when I discovered a 20 per cent reduction in methane emissions.

Excited by this finding, a global search for seaweed with even more methane-busting potential began. A few livestock researchers in Australia with CSIRO, and seaweed researchers with James Cook University (JCU) had a similar interest. They combined their expertise in studying the fascinating chemistry of seaweeds for applications in livestock nutrition. I joined CSIRO and took the role to lead the proof-of-concept for a natural livestock feed ingredient to reduce methane and improve feed use efficiency. Everyone involved knew they would find good seaweeds, but no one expected the nearly complete elimination of methane emissions that the red seaweed Asparagopsis was capable of.

2) What is your view on the Asia-Pacific seaweed industry in 2030?

There are a lot of cattle and sheep in the world, and a lot of seaweed. That said, getting them together so that a specific seaweed feed ingredient could effectively reduce methane emissions from red meat and dairy production at large scale is challenging.

The Asia-Pacific region has a long history of abundant seaweed production and is well suited environmentally for Asparagopsis seaweed, which is native to Australia and found throughout the region.

The industry has demonstrated enthusiastic interest in cultivation of Asparagopsis and the number of active producers continue to grow. Climate change is driving pressure to dramatically reduce greenhouse gas emissions, so the need and interest is great. There is strong industry and government support globally to respond to the challenge with urgency so there is great opportunity for the seaweed industry. It is already evident that large scale production of Asparagopsis is on the horizon and expected to be well developed in the Asia-Pacific by 2030.

3) What will you be talking about at Seagriculture Asia-Pacific 2023?

There will be an evolution through the foundation story to the up-to-date status of Asparagopsis science relevant to its utility in the red meat and dairy production industry.