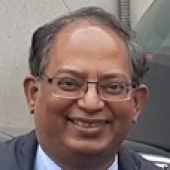 Shrikumar Suryanarayan is the Managing Director and co-founder of Sea6 Energy Pvt. Ltd. Bangalore (www.sea6energy.com) since 2010. His previous honorary positions include President of the Association of Biotechnology Led Enterprises of India ( ABLE) from 2018-2021 and  Adjunct Professor at the Department of Biotechnology, at the Indian Institute of Technology (IIT) Madras. Shrikumar served as the Chief Executive officer for the Translational Health Sciences Institute (www.thsti.res.in), at the National Capital Region Biosciences Cluster, Government of India from 2009-2010. He was one of the early team members at Biocon Limited, Bangalore (www.biocon.com) and served as their President of Research and Development and Chief Scientific Advisor for 25 years until 2009.

Shrikumar has a degree in Chemical Engineering from the IIT  Madras and a post-graduate degree in Biotechnology from the IIT, Delhi, He was conferred the  “Distinguished Alumnus Award ” of the Indian Institute of Technology Madras in 2009 and the Bio spectrum magazine “Entrepreneur of the year” award in 2012.

Growing seaweeds in the tropical seas of the world makes sense because of the presence of almost uniform day and night cycles throughout the year. This makes year-round agriculture on the sea possible.

This fact is especially important since seaweeds have a very high moisture content and are essentially an unstable feedstock unless they are dried. However, the huge volumes of low-cost feedstock required for potential industrial use makes the drying & storage of wet seaweed at a large scale an economically unviable proposition.  Hence the availability of a year-round supply of fresh wet feedstock obviates the need for additional drying and storage and allows tropical seaweed to be considered as a viable industrial feedstock for various applications.

At Sea6 Energy, we have innovated novel cultivation systems to enable the large scale cultivation of vegetatively propagated tropical seaweed at low cost. Furthermore we have demonstrated that it is possible to convert fresh wet feedstock directly into various industrial applications like for Bio-stimulants, Biomaterials (including biodegradable plastics) as well as to crude oil and natural gas.

Using these technologies, it is possible to envisage that we could build an entirely sustainable bioeconomy based on the cultivation of seaweed at large scale in the open oceans before the end of the decade.